Iodine is necessary for the production of thyroid hormones. Severe iodine deficiency results in enlargement of the thyroid gland (goitre) and is of particular concern during pregnancy as it can adversely affect the growth and brain development of the foetus. Historically, Iodine deficiency affected people in regions with iodine deficient soils in the days when eating local was the norm. It was not thought to be an issue in Australia until researchers began measuring iodine levels and found that pregnant women often had levels that were considered mildly deficient. Iodine levels in children in the south east of Australia are lower than in Queensland and Western Australia due relatively low soil iodine levels in the south east. The median iodine intake in Australia is only about 100mcg which makes us mildly iodine deficient. The recommended intake is 150mcg for adults, 220mcg during pregnancy and 270mcg while breast feeding.

Several factors have further reduced national iodine status. The dairy industry stopped using iodine based disinfectant to clean milking equipment. The food industry failed to use iodised salt as processed food overtook salt added in the home as the main source of salt in the Australian diet. The problem is being addressed by legislation requiring bakers to use iodised salt but organic bread is exempt from this regulation and many people are avoiding bread because they are following gluten free, grain free or low-carb diets. We suspect that diets that are nutrient poor in general are a big part of the problem – many people obtain a lot of their calories from meat, dairy, sugar, oil and processed food and eat very few vegetables or other whole plant foods. 95% of Australians do not even get the recommended 5 serves of vegetables plus 2 pieces of fruit per day.

Although it is important to have an adequate iodine intake, particularly during pregnancy and breast feeding, more than 1000mcg per day can be toxic. There was an ‘outbreak’ of iodine poisoning in Australia several years ago when one soy company added too much of the iodine rich seaweed product, Kombu, to one of their soy milks. Many plants, including soy, cruciferous vegetables and flaxseed contain goitrogens, substances which inhibit the utilisation of dietary iodine. These goitrogens are not thought to be a problem at usual levels of intake in persons whose iodine intake is adequate.

We are confident that a whole foods plant based diet can provide adequate iodine in Australia. This style of eating eliminates nutrient-depleted foods such as vegetable oils and includes large volumes of a variety of whole plant foods. Furthermore these foods are sourced from many different regions including Queensland and WA where the soils are richer in iodine. Note there is a scarcity of Australian data on the iodine content of plant foods.The iodine content of land plants is dependent on the iodine content of the soil in the region in which they are grown so it varies across Australia. Be aware that if you use Australian nutrient tracking software many common plant foods have no measurement listed for iodine so it may make your iodine intake appear lower than it is.

We recommend if you are going to add salt to your meals that you use iodised salt rather than ‘gourmet’ salts (however, see our Salt FAQ for more information on why added salt should be minimised). Seaweed products are a rich source of iodine but be aware that Kombu (kelp) contains extreme levels of iodine while Hajiki contains toxic quantities of arsenic. Nori, wakame and dulse are recommended. You can add these to salads or soups a few times a week to boost your iodine intake. 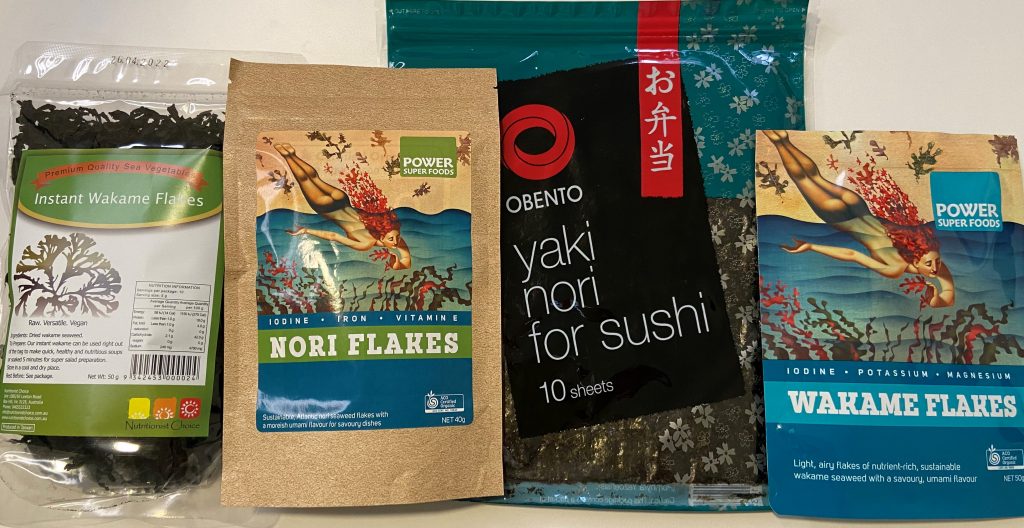 Women who are breast feeding, pregnant or planning to become pregnant can have their iodine status checked with a urinary iodine measurement (which is not very accurate) or just take an iodine supplement of 150 mcg per day. Supplements are not necessary for women eating a whole food plant-based diet who have a consistently high intake of leafy green vegetables plus regular sea vegetable consumption.

Return to Vitamins and Minerals page