Sodium is an essential nutrient, but the requirements are relatively low. We evolved in an environment of sodium scarcity and our bodies are exceptionally good at conserving sodium and can adapt to low intakes by minimizing sodium loss in sweat and urine. The absolute minimum requirement is only about 115mg per day but to allow for environmental and individual variation, the recommended safe minimum intake is 500mg per day. The Australian Nutrient Reference Values lists adequate intake as 460-920mg per day.

The average Australian intake is about 3600mg per day. This is far too high. The World Health Organization recommends a maximum intake of 2000mg sodium per day. The Nutrient Reference Values previously set the suggested target at 1600mg but revised this to 2000mg in 2017, claiming the new “suggested dietary target of 2000mg/day is more realistic as it represents a total diet that meets all nutritional requirements, given the current food supply.” It seems that they surrendered to a food industry that continues to add too much salt to our basic food staples. The Nutrient Reference Values review of the research reported that increased sodium intake was associated with increased blood pressure throughout the range of intakes from 1200mg and 3300mg per day – there was no point in this range at which there was not a relationship between sodium intake and blood pressure. This suggests to us that the daily sodium intake target for optimal health is no more than 1200mg per day. 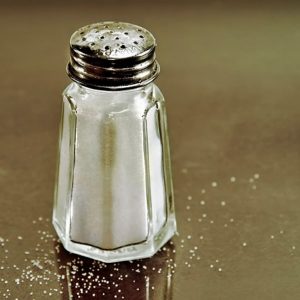 Regular salt is a crystalline substance made up of sodium ions and chloride ions. These ions go their own way when dissolved in water. The sodium is the part that interests us because it has the greatest effect on our health. Other sodium ‘salts’ include sodium bicarbonate (rising agent) and monosodium glutamine (MSG, a ‘flavour enhancer’).

Salt and sodium numbers:
* 1000mg of salt contains approximately 400mg (390mg actually) of sodium
* Conversely multiply sodium by 2.5 to convert back to grams of salt
* One teaspoon of salt is about 5g of which 2g (2000mg) is sodium

The body controls how much fluid it has in the blood and tissues by carefully regulating sodium excretion through the kidneys. We then pee out any excess water to keep the saltiness of the blood constant. Those of us with a low salt intake notice that a single salty evening meal dries up the pee stream until the next day, then we experience an increased fluid output – most Australians top up the excess sodium at every meal and therefore always carry excess fluid. The extra fluid in the body raises blood pressure – a leading risk factor for strokes and heart disease. Excess sodium also impairs endothelial function and increases cardiovascular risk independent of blood pressure. The high potassium content of a plant-based diet partially offsets the effects of sodium on blood pressure.

Salt and the gut
A high salt diet, the amount in the usual Australian diet, has adverse effects on the gut. Gastric cancer is strongly associated with salt intake (Umesawa et al. 2016). Salt is a preservative and has antimicrobial effects on our gut microbiome, reducing the production of beneficial short chain fatty acids by good microbes. Salt increases symptoms of bloating – one study found that adding the usual amount of salt back to a low salt diet increased symptoms as much as adding extra fibre (Peng 2019).

Salt and calcium excretion
Increased sodium intake increases urinary excretion of calcium. This can result in calcium being removed from bone to maintain blood levels. This study found that the effect was worse in post-menopausal women and may contribute to osteoporosis in the long term (see Evans et al 1997). See also our page on Osteoporosis

Our taste for salt

Humans have a natural taste for salt – perhaps its related to the environment of salt scarcity that we evolved in, or a method of detecting which plants are rich in minerals. A little bit of salt may taste good, but with continued use our taste buds become dulled and, like a drug, we need more and more to get the desired effect. With our senses dulled, natural foods taste bland without the addition of salt and we are trapped.

Salt can act as an appetite enhancer. We tend to eat more of something when its salty (Bolhuis et al. 2016). Adding a small amount of salt at the table can make whole plant foods more palatable during transition. Conversely, keeping it SOS-free (sugar, oil, salt) can assist with weight loss. Salt may be part of the reason why some people overeat bread.

The food industry know that salt is a flavour and appetite enhancer – it’s a cheap way to make their products taste better and to sell more product to their salt habituated customers. Industry targets for salt reduction are weak and long term. The approach seems to be to reduce salt at the top end of the added salt range while keeping everything else moderately salty. The target for bread, for example, is 400mg per 100g which is still far too high. Our health authorities and legislators have failed to adequately protect the Australian people from the health consequences of excess salt. The US salt industry seems to have taken the tobacco industry approach of creating controversy and doubt over the adverse effects of current salt intake: see Don’t Be Confused by Big Salt

People are often unaware of how much salt they eat because most of it is added before the food gets to the table. Bread and cereals are big contributors. A single slice of wholemeal bread contains about 200mg. Soups and crackers are often high in salt. Many sauces and flavourings, including some spice powder mixes are high in salt. Meals eaten in cafes and restaurants are almost always high in salt. We often see recipes with multiple sodium sources such as tamari, curry paste plus vegetable stock or miso.

It is a common misconception that miso does not count towards salt intake. Miso paste contains 200-400mg per 10g (1 tbsp miso can weigh 20g) and a good quality miso soup sachet, 671mg. There is research showing miso does not raise blood pressure but this is observational data and the authors note that miso may have been a marker of a more traditional Japanese diet (Kanda et al 1999). The soybean component may offset some of the effects of the high sodium content – but why not just eat the soy bean without the salt. Research on miso and cancer reported that the risk of gastric cancer in subjects who consumed 3 and ≥4 bowls/day of miso soup was approximately 60% higher than in those who consumed less miso soup (Umesawa et al 2016) – which is consistent with other research on sodium intake and gastric cancer. So, we recommend caution consuming miso – use in very small amounts.

*Note that commercial vegetable stocks are very high in sodium. The nutrition label makes it difficult to determine how much sodium you are actually adding to your cooking, unless you make it up as suggested and use it in a very dilute form.

When it comes to the type of salt used, it does not make much difference to the sodium content. Gourmet salts – Himalayan, Celtic, sea salt – contain nearly as much sodium as ordinary salt. Adding these to your food is no healthier than just adding ordinary table salt. The amount of other minerals they contain is small and one would need to eat a toxic amount of salt for these to contribute significantly to daily mineral intake. If you are going to use any salt it may as well be iodised salt given that Australian soils are known to be low in iodine.

There are some strategies we use to manage our salt intake. Check food labels for sodium content and consider how many serves you are likely to eat in one day. A good rule of thumb for foods that contribute significantly to your daily intake is a sodium target of less than 1mg of sodium per calorie (4.2 kilojoules). The 1mg/calorie rule does not apply to items to sauces, spices and flavouring agents that are used in small quantities – dietitian Jeff Novick suggests condiments could have a sodium to calorie ratio of 4:1. However, some products – soy sauce, tamari, Bragg’s aminos – are extremely high in sodium, and it does not take much to push up your daily sodium intake. Assume that meals eaten out are high in sodium. If a dish tastes unnaturally delicious, it may be because it is high in sodium or MSG.

There is little doubt that consuming salt at anywhere near the current Australian intake is injurious to health. The question remaining is whether a low salt diet (eg. 1200mg sodium) will support our health as well as a no added salt diet (eg. 500mg). We don’t have the answer as the research has not been done. For most whole food, plant-based people the challenge will be just keeping their sodium intake in the low range, given the number of food products that have added salt.

How low in salt you need to be will depend on your health status, health goals and genetics (as some individuals are more salt sensitive than others). If you suffer from hypertension, heart disease, fluid retention, PMS, arthritis, autoimmune disease, inflammatory bowel disease, osteoporosis, IBS or bloating, then you may need a very low sodium intake for best results.